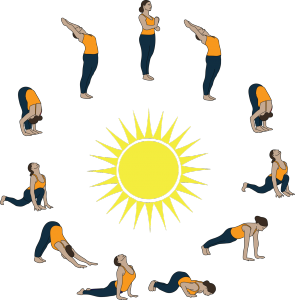 We salute the sun because it is responsible for life on Earth. The sun itself has cycles, and so the sun salutations have parts. Sun salutations or Surya Namaskar in Sanskrit, is a moving flowing meditation. It is great to wear comfortable clothing that easily moves for this practice, like yoga shorts or yoga pants.

This moving meditation is a great way to warm up before further asana practice. Students should practice the right side as written and then repeat on the left side. Do both sides for one full round and repeat the round 4-6 times. In Sivananda yoga classes, students receive a nice rest in Savasana after Surya Namaskar before moving onto the series.

It is a great strengthening and activating exercise, effectively connecting students with their body and breath!